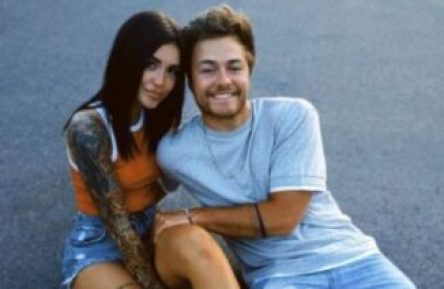 Taela whose real name is Taylor Mae LaCour is best known for being the girlfriend of Girl Meets World actor Peyton Meyer. He is known for his role as Lucas Friar on the Disney Channel television series Girl Meets World, and his earlier recurring role as Wes Manning on Disney Channel’s Dog with a Blog. The two are in the spotlight after Peyton was accused by fans of “leaking their sex tape on TikTok.”

A TikTok account named Leak Room allegedly posted a sex tape of who fans believe to be Peyton and a woman who’s said to be his girlfriend, Taela.

She was born on May 25th, 1997, and is currently 24 years old (as of 2021). Peyton celebrated his beaus birthday on May 25th by posting a photo of himself and Taela on Instagram with the caption, “Your strength is contagious and you have made me a better man. I don’t know who brought you into my life but I need to start writing some thank you notes. 24 has some big things coming for you. Happy birthday baby 🥂❤️”

Peyton Meyer and Taela began dating on 14th February,  Valentine’s Day, with a sweet shot of the two of them, though now things have heated up after. The two shared the same shot of them snuggled up on the couch together, with the actor’s in color and the singer’s in black and white. “Anywhere with you,” she captioned hers, to which he commented, “Any time ❤️”

The singer celebrated being public with their romance by sharing a PDA shot of them sitting on each other and touching tongues. She wondered in the caption: “what’s wrong w me why do i feel like this”

In April 2021, Peyton said it “feels good to be home” as he shared two photos of them kissing and smiling while hanging out in the hot tub together.

Most recently, Taela celebrated her man’s big movie release with a sexy mirror selfie of her in a black bra and him in a black T-shirt with mussed-up hair. “Big day. proud of you, baby!#itsjvddamnit,” she said, to which he sweetly replied: “I love youuu.”