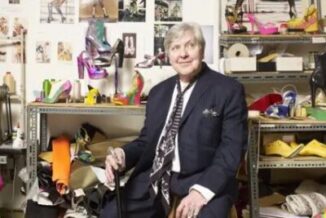 Terry de Havilland was a British shoe designer. He famed for his crucial part in the Swinging London fashion scene. He was born on 28 November 1942 in London into a family of cobblers and was quite young when his parents started their own company, Waverley Shoes.

Terry was already assisting in the workshop at the age of five. Their company catered to wealthy West End clientele and showgirls from the city’s busy theatres, producing highly popular winkle pickers that were selling faster than his father could make them. Havilland died on November 29, 2019, at the age of 81.

The saddest farewell to the Rock and Roll Cobbler, Terry de Havilland who has died at the age of 81. An absolute genius and such a lovely man. The world just got a lot less glamorous… ⚡⚡⚡ pic.twitter.com/iuUqbHjAvJ

Havilland’s first pair of self-designed shoes came to the attention of a boutique on the Kings Road in 1964, where they were spotted on the feet of his girlfriend at the time, model Perin Lewis, at a photo shoot.

They caught the eye of Queen editor Annie Traherne, who featured them in the magazine and launched the career of de Havilland as a designer.

The de Havillands then opened ‘Cobblers to the World’ in Camden Stables Market, a reimagination of the de Havilland seventies heyday combined with a fetish touch that was visited by stylists, costume designers, and eclectic clientele.

The company was now producing shoes for international fashion publications and blockbuster film productions. Still, Terry de Havilland suffered a minor heart attack on Christmas Eve in 2001, and the shop was closed the following February to ensure he could focus on editorial work and rebuild the de Havilland brand. Terry de Havilland opened a pop-up flagship store in London in 2013.

In 2006, Terry de Havilland was nominated as Accessory Designer of the Year at the British Fashion Awards and in 2010 was awarded a Drapers Lifetime Achievement Award for his contribution to footwear design over the last fifty years.