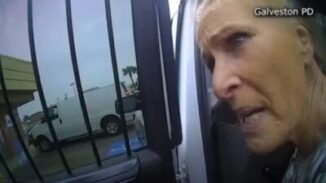 According to Terry White Bio, Wiki, and Biography, She is a 65-years-old woman from Texas who arrested at Bank of America. viral video shows police arresting Terry White at a Texas bank after she refused to wear a mask. She claimed she was the victim of “police brutality” and called others in the bank “sheep” when they would not help her, body cam footage released by Galveston Police shows.

The video was obtained from bodycam footage at the Bank of America in Galveston Thursday, March 11, 2021, one day after a mask mandate was lifted. Texas Governor Greg Abbott’s loosening of the statewide mask mandate did not mean masks were no longer required but transferred the decision-making power from the government to private businesses. Abbott told the Texas Tribune he was loosening the restrictions so that “businesses and families in Texas have the freedom to determine their own destiny.”

Despite the arrest, White told ABC 13 she is glad she stood her ground. She said she is “very opposed” to wearing masks.

“I won’t wear that diaper on my face!” she said.

She explained in the interview she traveled to the bank in her RV, so she could not use the drive-thru as she would have preferred. The Central City location was the only one that was open to her, she said. She was taking a trip across the country to cross an item off the bucket list and wanted to close her account.

She said in the interview the encounter at the bank was the only time she faced issues for not wearing a mask. White said an employee asked her to put on a mask when she entered the bank.

Galveston Police issued a statement to ABC 13 clarifying police are not enforcing mask-wearing, but responded to a complaint of criminal trespass.