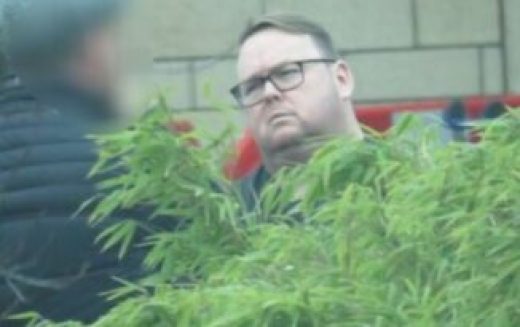 Thomas Maher is an Irish haulage boss who lived in Warrington, Cheshire. He was described as a “professional facilitator” for crime gangs ranging from Colombian drug traffickers to pan-European syndicates. He paid himself less than minimum wage for tax purposes but lived a luxurious lifestyle spending hundreds of thousands of pounds on cars, holidays, and jewelry.

He also had a watch collection worth £600,000 and splashed out on holidays, spending £70,000 on breaks in around three years. He bought a piece of £20,000 art made from bullets while in Dubai

He conspired to transport £1.5million of cocaine and launder £1million in cash. He used encrypted phone network Encrochat – which was accessed by law enforcement agencies across Europe earlier this year to plan the transportation, the court heard. Sentencing him, Judge David Aubrey QC said: ‘You were an extremely important cog in the wheel of a sophisticated network of distribution of class A controlled drugs which had an international element.’

Maher, who used the Encrochat handles Satirical and Snacker for his messages was arrested in October last year after the deaths of 39 Vietnamese people found in a shipping container in Essex but was never charged in connection with the deaths.

A spokesman for the National Crime Agency said officers seized vehicles including a high-end Range Rover, Land Rover Discovery, and an imported Corvette worth £70,000 following his arrest. He spent thousands on holidays in Dubai, Mexico, and New York and while in Dubai bought artwork including a map of the world made up of bullets.

The judge said Maher, owner of Thomas Maher Transport Ltd, provided ‘expertise’ from owning a haulage business within the operation.

Later pleading guilty at an earlier hearing to two charges relating to the import of class A drugs into the UK and two charges of money laundering. The dad-of-three would fly to Dubai, Mexico, and New York – business class or first class. He hired a private helicopter in New York and in Dubai bought a piece of £20,000 art made from bullets. He admit­ted to conspiracy and was jailed for 14 years and eight months.

Police then put him under surveillance for seven months until they arrested him a second time.