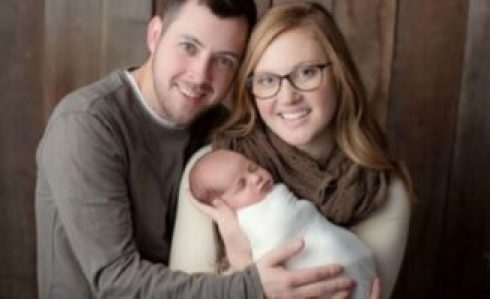 Tina Gibson gives birth to a baby from the oldest frozen embryo, just a few years younger than her.  Though Molly Gibson is just over one month old, she could’ve been born at any point in the last 27 years.

Her embryo was frozen in October 1992 and stayed frozen until earlier this year in February, when Tina and Ben Gibson of Tennessee adopted her embryo. Tina gave birth to Molly in late October — nearly 27 years after her embryo was first frozen.

A Tennessee baby girl has made history after being born from an embryo that was frozen 27 years ago.

Molly Everette Gibson was born on October 26 to her mom Tina Gibson, who was only one year old when her daughter’s embryo was frozen back in 1992.

The embryo was thawed in February and transferred to her mom’s uterus, marking the longest time on record an embryo has been frozen before a successful birth.

In the first show of sibling rivalry, Molly beat her own sister’s existing record after Emma Wren Gibson was born in 2017, 24 years after her embryo was frozen.

Her embryo had been frozen on October 14 1992 before being thawed by National Embryo Donation Center Lab Director & Embryologist Carol Sommerfelt on February 10 this year.

Molly grew to full term and was born on October 26, becoming the latest addition to the Gibson clan.

Until Molly’s birth, her three-year-old sister Emma was the previous record-holder for the longest frozen human embryo to result in a successful birth.

Emma’s embryo was frozen on the same day as her sister’s back in 1992 – about a year and a half after Tina was born – making the two girls full genetic siblings.

Her embryo was thawed on March 13 2017 and transferred into Tina’s uterus two days later.

Emma was born on November 25 that year weighing 6 pounds and 8 ounces.

The Gibsons told ABC News at the time that they had been unsure about embryo donation when Tina’s father first suggested it as an option to them.

The couple said, after a while, they came around to the idea and visited the National Embryo Donation Center in Tennessee.

They looked through one-page profiles of prospective donors before selecting their preferred choice.

Sommerfelt said the fact the two sisters have both been born successfully shows the advancement of technology, reported Good Morning America Monday.

‘When Tina and Ben returned for their sibling transfer, I was thrilled that the remaining two embryos from the donor that resulted in Emma Wren’s birth survived the thaw and developed into two very good quality embryos for their transfer,’ said Sommerfelt.