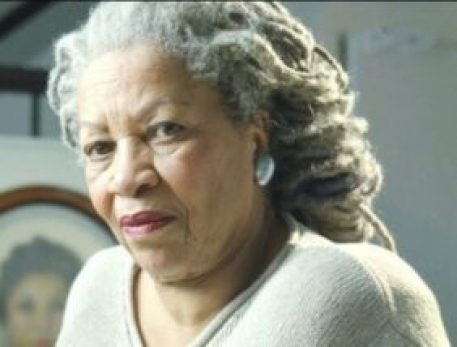 She won the Pulitzer Prize and the American Book Award in 1988 for Beloved. She also awarded the Nobel Prize in Literature in 1993.

Toni Morrison in 1978 reading the ending of Song of Solomon

"Now he knew why he loved her so. Without ever leaving the ground, she could fly." pic.twitter.com/APWVWVcSth

Toni Morrison was born to Ramah and George Wofford. She was the second of four children in a working-class, African-American family.

When Morrison was about two, her family’s landlord set fire to the house they lived in, while they were home because her parents couldn’t pay the rent.

Her family responded to what she called this bizarre form of evil by laughing at the landlord rather than falling into despair.

Morrison later said her family’s response demonstrated how to keep your integrity and claim your own life in the face of acts of such monumental crudeness.

Morrison’s parents instilled in her a sense of heritage and language through telling traditional African-American folktales and ghost stories and singing songs.

She also read frequently as a child. her favorite authors were Jane Austen and Leo Tolstoy.

She became a Catholic at the age of 12 and took the baptismal name Anthony (after Saint Anthony), which led to her nickname, Toni.

Attending Lorain High School, she was on the debating team, the yearbook staff, and in the drama club.

she became the first African-American woman in 1964, company history to work as an editor at Random House.

Over the next 20 years, she would work with emerging fiction authors such as Gayl Jones and Toni Cade Bambara, on a memoir by Muhammad Ali and books by such activists as Angela Davis and Black Panther Huey Newton.

A special project was editing The Black Book, a collection of everything from newspaper advertisements to song lyrics that anticipated her immersion in the everyday lives of the past.

Determined to be a writer, she published her first novel, The Bluest Eye, in 1970, which was followed by five others, including her Pulitzer-winning novel Beloved, which tells the story of a mother who makes a tragic choice to murder her baby to save the girl from slavery. It was later adapted into a film of the same name starring Oprah Winfrey and Danny Glover in 1998.

In 1993, she came the first black woman to receive the Nobel Prize in Litterature, praised by the Swedish academy for her visionary force and for her delving into the language itself, a language she wants to liberate from categories of black and white.

Morrison married Jamaican architect Harold Morrison in 1958 and gave birth to two sons, Harold Ford in 1961 and Slade Kevin in 1964. The couple divorced after six years of marriage.

Her publisher, Alfred A. Knopf, announced Tuesday that the award-winning author died Monday night at the Montefiore Medical Center in New York. She died after a brief illness, her family said in a statement.

Toni Morrison was a towering intellect, a brilliant scribe of our nation’s complex stories, a heartbreaking journalist of our deepest desires, and a groundbreaking author who destroyed precepts, walls and those who dared underestimate her capacity. Rest well and in peace. pic.twitter.com/nMkxXRtEoz