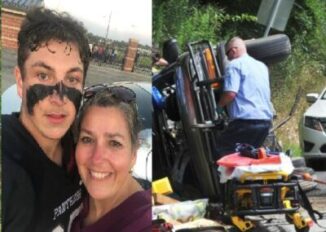 Trevor Buckley, a teenager from Russiaville who was a Western High School student and football player, died on Saturday, August 21st, in a one-vehicle crash in eastern Vigo County, near Terre Haute.

Buckley was a junior lineman on the Panther football squad this season. Ladwig knew Buckley both from the classroom and as one of his coaches talked about what kind of teammate Buckley was. Buckley, who wore the No. 70 jersey, was starting to make an impression on the line at the high school level and being a teammate and friend.

Tim Ladwig, the Panthers’ eighth-grade football coach, and a seventh-grade math teacher, described him as “a great kid,”

Ladwig said. “He always had a great perspective on things. I think we can all learn from him is how He did the right thing when the time came to do it. That’s the kind of guy he was.”

I guarantee if you ask that question to anybody who played football with him or who coached him, the No. 1 thing they’re going to say is how tough he was,” Ladwig said. “He was a tough kid.

And he had fun playing the game. [If things didn’t go well] he wasn’t going to get down and start yelling at his teammates and yell at the refs; he was going to go out there and play and have fun the way it’s supposed to be done.”

Trevor Buckley died in a car accident on Saturday, August 21st, after being ejected from his pickup truck and died at the site of the rollover crash on Indiana 42. Deputies responded to the crash scene at about 5 p.m., as per Vigo County Sheriff John Plasse.

Plasse said the westbound truck went off the north side of the road for an unknown reason. Buckley then overcorrected, causing the truck to roll into a ditch. Plasse said it appears Buckley was not wearing a seatbelt at the time of the crash.

Alcohol and drugs did not appear to be a factor, the sheriff said.

The family, especially his mom, friends, teammates, teachers, and coaches of Trevor Buckley, paid tribute to the promising football player as they try to come to terms with his sudden demise.

Their connections and togetherness help deal with the situation.

A day after that accident, western football coach Alex Stewart said, “We were able to get together on Sunday.

We had an opportunity to get together, which I think was a good thing for them in the healing process.”

Buckley’s mom, Wilda Buckley, came to the gathering to address the team. “She stood up and talked. She was so strong, and I think her strength helped the team push through because they saw how strong she was being, and she just lost her son,” Stewart said.

Skin Care mogul Peter Thomas Roth is rumored to be dating actress Anne Heche and after the pair were spotted several times together in the past few weeks. Multiple sources confirmed to Page Six that the “Six Days Seven Nights” actress and Roth were seen together in the Hamptons looking like more than just pals.