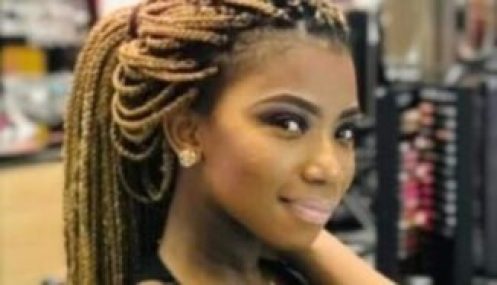 Tshegofatso Pule was a pregnant woman who found stabbed and hanging from a tree in a suburb of Johannesberg on Monday. Tshegofatso Pule had been missing since June 4, and her body was discovered on June 8, according to South African news outlet Sowetan Live.

Gauteng police spokesperson Captain Kay Makhubele confirmed to Sowetan Live, “The deceased was found by a member of the community hanging from a tree, who then notified the police. The deceased is also confirmed to be pregnant. Suspects are unknown at the moment,” said Makhubele, who said Pule had also been stabbed in the left breast.

According to the news outlet, Pule was last seen or heard from before going to visit her boyfriend in an area called Florida, which is a suburb of another area called Roodepoort about 10 miles west of Johannesberg. The boyfriend was not named, but it was reported he has a wife.

A family spokesperson told Sowetan Live, “We cannot speculate about what led to her death, but we know things were not well with her boyfriend. His wife also knew about Tshego and she was always fighting with her,” he said.

The last Pule’s family heard from her was that she had gotten into a fight with her boyfriend and was “demanding to leave” Thursday night, according to the news outlet. Her family tried to reach her and the boyfriend all through the weekend but said her phone was off. On Sunday they finally filed a missing person report.

Other reports say Pule was seen on surveillance video getting into a grey jeep and leaving the boyfriend’s house.

Enough is enough. How many more hashtags? Can we just take it to the streets. Or do something. It can't be business as usual. Something needs to give. 💔😭 #AmINext #JusticeForTshegoPule#justiceforNaledi

Pule’s Uncle, Tumisang Katake told new station eNCA that police were questioning the boyfriend but said he couldn’t share any details as the investigation is ongoing.

A #JusticeForTshegoPule hashtag is surfacing on social media. According to Savanna News, “Tshego Pule represents all South African women and men who are at risk of being murdered. The major question is whose name will trend with a hashtag next.”

The person who found Pule’s body reportedly took a video of her before calling the police. According to Sowetan Live, the slain woman’s family saw the video in the aftermath of the news on social media, causing further pain amidst the tragic loss.

A neighbor of the family, Karabo Makiri, told Sowetan Live of Pule, “She was such a lovely girl who always had a smile on her face. She was friendly but kept to herself,” Makiri said.

Violence in South Africa was called a National Crisis in September 2019. A woman is murdered every three hours in South Africa, according to VOANews, who say many are assaulted and raped before their death.

Our deepest condolences to the family & friends of Tshegofatso Pule & Naledi Phangindawo, violence that is perpetrated on women continues to be the ultimate pandemic plaguing our society, we call for justice to be served. #JusticeForTshegoPule #justiceforNaledi pic.twitter.com/ltodVzsE00

VOANews reported, “The latest crime statistics released by the Department of Police reveal the depth of the crisis: Nearly 3,000 women were murdered between April 2018 and March of this year [2019]. This translates to seven per day.”

An organization called Cesvi, which works against violence on women and children in South Africa, reports that country has the “highest number of cases of violence against women in the world…In South Africa, 40% of men have beaten their partners and one in four has committed sexual crimes. Even if only 2% leads to charges being laid, violence against women is a growing phenomenon, and as many as one woman in four has undergone beatings or abuse.”