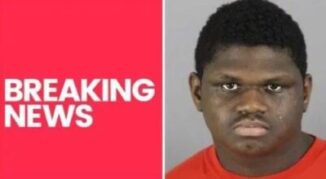 Joe Koch, deputy superintendent of Waukesha Schools has sent an email to parents and staff within the district just days before the shooting, warning about threats, according to the Milwaukee Journal Sentinel. The email went out on Wednesday, 27 November. It said that parents and school staff should remind students “that threats, both direct and indirect, towards our students and schools will not be tolerated, even if intended as a ‘joke.’”

It also asked parents to check their student’s backpacks “to ensure that the items in the backpack are appropriate for school,” and encouraged parents to talk to their children about their behavior on social media. The email was prompted by “recent events in Southeastern Wisconsin regarding school threats.”

The students of Waukesha South High School heard an alert Monday morning calling for a lockdown. They ran to their classrooms and hid. Some reported hearing gunshots, according to the Milwaukee Journal Sentinel.

Tyrone was shot by a school resource officer at Waukesha South High School Monday, 2 December 2019. Officers immediately rushed to give first aid to Smith and he was taken to a hospital, where he was listed in stable condition, according to a statement from the Waukesha Police Department.

Police did not say in the written statement how many times the student was shot, but students told the Milwaukee Journal Sentinel they heard three gunshots. Smith was the only person who was injured during the incident.

Tyrone Smith’s mom told TMJ 4 her son had been in foster care before the shooting and recently returned home. She spoke to reporters on 3 December 2019. At that time, she said Smith was still in the hospital recovering from three bullet wounds. He was shot in the leg, wrist, and underarm. She told reporters she expected he would be taken to jail after he was released from the hospital.

One student wrote on Twitter, “as another student from Waukesha South, u don’t know the fear we were all going through. I didn’t know if I’d be able to make it out alive. We were ALL terrified. Yes, this was another school shooting and instead of putting your opinion on it, you should send your love & prayers.”

“Waukesha South student here, we’re all shaken up but we’re slowly going home. Love all of you guys, stay safe.”
“I can’t believe that happened I never thought I would experience something like that I was really scared when I was hiding,” one student said in a reply to the tweet.

The first student responded, “I’m pretty sure for a while we all were in shock and doubt.”