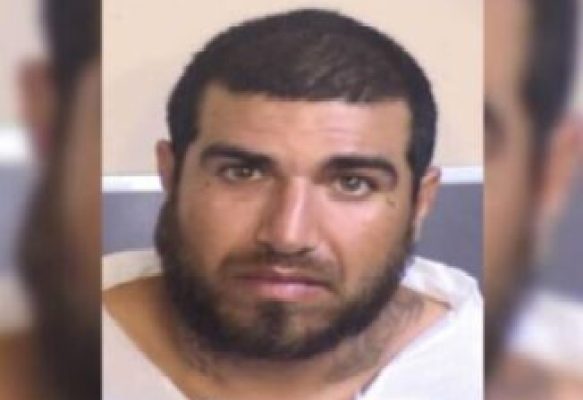 Victor Topete is a California man who led police on an insane two-day car chase that spanned multiple cities, carjackings, and even a kidnapping.

Topete is a native of Pittsburg, California, has been charged with 15 felonies and three misdemeanor charges connected to the two-day chase reminiscent of a scene out of the video game ‘Grand Theft Auto’ that culminated on June 13, 2020.

He was charged with attempting to injure a police animal after he was described as having tried to use his thumbs to gouge the dog’s eyes. Topete’s lawyer claimed that he was trying to get the dog off his leg.

Topete is accused of kidnapping his friend – a Pittsburg man – and stealing his car after asking for a ride. He is said to have then gone to his parents’ house, taking his father’s truck from the scene. The car had a Bobcat excavator attached to the trailer.

He allegedly led police on a chase through Concord city in the truck, but authorities stopped their pursuit when it appeared that the excavator would break loose.

‘I saw the tractor go left to right wobbling, that’s when I was like, ‘Enough is enough. There’s more value to life than chasing a stolen vehicle,” Concord Ofc. Isidro Llanos said during the hearing.

At the time, Topete was out on bail in a manslaughter case in Fresno. The case stems from an April arrest where he allegedly hit his 54-year-old neighbor during an argument. The victim died from the injuries from the fight, the Sacramento Bee reports.

During the June car chase, Topete is said to have stolen a Ford F250 from his dad, driving the vehicle into a head-on collision off Fish Ranch Road in Orinda just moments after he had been driving in the wrong direction on the shoulder of Highway 24.

‘When you saw the white truck coming at you, what did you think? What was going through your head?’ deputy district attorney Chris Sansone asked White during his October preliminary hearing.

White replied: ‘That I was going to get seriously injured.’

Video shows Topete then exiting the vehicle and hopping a fence before dropping some 20ft to the pavement below, close to the Contra Costa side of the Caldecott Tunnel entrance.

While attempting to dart across the freeway, Topete – wearing a neon green vest that he took from his father’s truck – was struck by a car but continued with his effort to cross the road.

Topete allegedly tried to carjack one woman, failing to do so and having to go to another. Police shared that he approached a white car, whose driver proceeded to roll down his window, prompting Topete to reach inside the vehicle and unbuckle the man’s seatbelt.