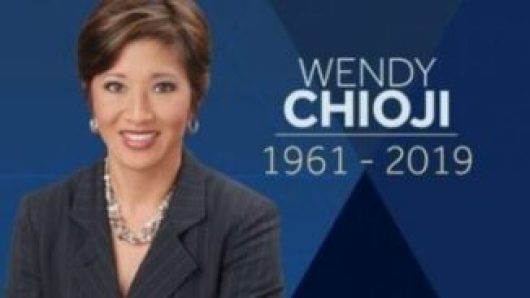 Wendy was born in Oxnard, California, but grew up primarily in Silver Spring, Maryland. She went to college at Indiana University in Bloomington, Indiana.

She came to WESH in 1988 from Savannah, Georgia, to work as an evening reporter. She recalled her first report in Central Florida.

Chioji covered countless stories during her two decades at WESH. The space shuttle Columbia disaster the pope’s visit to Cuba the Atlanta Olympics after the bombing the Salt Lake City Olympics political conventions presidential visits and even the time Mel Gibson and Danny Glover came to Orlando for “Lethal Weapon III.

She won an Emmy award as part of a team that put together a WESH 2 News special report titled “A Heroin Emergency” and the DuPont Columbia Award for coverage of the Shuttle Columbia disaster.

Chioji left WESH in 2008 to pursue a new life built around her passion for physical fitness and athletics.

During the final moments of her final newscast at WESH 2 News, colleagues and the Central Florida community paid tribute to Wendy. You can watch that segment in the video player below.

It's hard to concentrate on work and be "happy" when my heart is heavy. You have always been a TREASURE, #WendyChioji You will be SORELY missed. #CancerSucks pic.twitter.com/dWgbCIlnZg

She was remembered in a tribute posted by her brother as beautiful, strong and defiant.

“My beautiful, strong, defiant, bad-ass sister, Wendy Chioji, lost her fight with cancer tonight. From climbing mountains to participating in triathlons, to traveling the world, she lived every day to the fullest. She never let her disease stop her from doing the things that she wanted to do. She is my hero, and I miss her already,” her brother Alan wrote, according to WESH 2.

Chioji Advocated for Other Cancer Survivors

Wendy Chioji had a website called “Live Fearlessly.” In the about me section, she described herself as “Cancer Survivor. Triathlete. Livestrong Advocate. Adventurer. Animal Lover. Ex-News Anchor. And maybe, Your New Best Friend. All while trying to make the world a better place.”

She wrote on her website that she was a “two-time cancer survivor who’s going for number three right now.

I survived Stage II breast cancer in 2001. During the ‘in-between,’ I quit my job as a news anchor at WESH in Orlando and moved to the mountains of Park City, Utah, where I spend most of my time outdoors, skiing, running, hiking, riding bikes, and appreciating every day.

I also completed 5 Ironman distance triathlons (including the Kona World Championship in 2012), dozens of half-Ironman distance races, and lots of shorter runs of every kind. Crossing a finish line for any sport (especially Ironman) is extra special for me as a cancer survivor. It’s one finish line, one more victory after cancer tried to kill me the first time.”