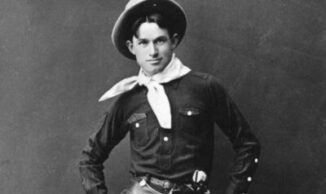 Will Rogers was a stage and motion actor, humorist, political commentator, and homespun cowboy. He was a Cherokee citizen born in the Cherokee Nation, Indian Territory.

According to Rogers’s biography, he was born William Penn Adair Rogers on November 4, 1879, as one of eight children on Rogers Ranch in Oologah.

That’s now in Oklahoma, but it was then considered Indian Territory, and his parents, Clement Vann Rogers and Mary Schrimsher, had Cherokee heritage.

The young Rogers took to ranch life, riding and using a lasso as a child. He ended up in the Guinness Book of World Records because he threw three nooses at once.

Roger was sent to military school in Missouri, but, in 10th grade, he decided he wanted to be a cowboy, according to his website. He ended up in Wild West shows.

In 1902 and 1903, he found himself traveling in South Africa with Texas Jack’s Wild West Show,” playing the Cherokee Kid,” and using his lasso. He joined the Wirth Brothers Circus and toured with it in Australia and New Zealand, his website says.

He returned to the U.S. and ended up in vaudeville until 1915. Swinging a rope isn’t bad,” he once said, as long as your neck isn’t in it.”

As Hollywood changed, so made Rogers’ career. He starred in silent movies and then talking films called things like See Paris (1929) and State Fair (1934). Altogether, he starred in 71 films, according to his bio.

Will Rogers Wife and Children

In 1908, amid his vaudeville career, Will Rogers took a wife. Her name was Betty Blake, and they would go on to have four children named Will Rogers Jr., Mary, Jim, and Fred.

Betty was a loving and supportive wife to Will until his death, his website says.

According to the Encyclopedia of Arkansas, Betty Blake Rogers helped manage the family’s finances and helped her husband pick film scripts.

Her father was a miller who died when she was young. She had eight siblings and performed in a theater. She met Will at her sister’s home, and they shared a sense of humor and love of music, the site reports, adding that Betty died of cancer in 1944, outliving her husband.

Rogers was honored with a Google Doodle for what would be his 140th birthday as part of Native American heritage month. According to Google, Rogers was known as America’s Cowboy Philosopher for insightful quips like the famous, I never met a man I didn’t like. He also joked All I know is what I read in the papers.

Rogers took on power elites with humor, speaking for the common person in the down-to-earth language of the West. Without rancor or design, Will debunked the mighty and reined in the foibles of government and follies of mankind. Humor was his tool, Will Rogers.com explains.

Rep. Jed Johnson (D-Okla.) once said of Rogers, according to Politico: The world well knows Will Rogers had many outstanding and loveable attainments. But probably the most outstanding of all was his love for humanity … He knew life. He was a friend of the man from all walks of life. He was broad-minded, generous, and, undoubtedly, the most beloved cities in the entire world.

The Will Rogers Google Doodle.

Will Rogers Cause of Death

Rogers’ life was full of lasting accomplishment, but it didn’t last that long. He died at age 55, in 1935, on a plane trip to Alaska, his website says.

According to Politico, Wiley Post, a veteran aviator, also died in the crash. The two men were pioneering a new air route from the U.S. West Coast to the Soviet Far East, the site reports.

Today, he is buried with his wife Betty and son Fred in Claremore, Oklahoma. After Rogers’ death in the plane crash, Betty helped preserve his memory through the creation of a memorial and state park, according to the Encyclopedia of Arkansas.

An Associated Press dispatch from the time started, Death reaching through an arctic fog, overtook Will Rogers, peerless comedian, and Wiley Post, master aviator, as their rebuilt airplane faltered and fell into an icy little river last night near this bleak outpost of civilization.

Never let yesterday use up too much of today.

The only difference between death and taxes is that death doesn’t get worse every time Congress meets.
Even if you’re on the right track, you’ll get run over if you just sit there.

There are three kinds of men. The one that learns by reading. The few who learn by observation. The rest of them have to pee on the electric fence for themselves.

Everybody is ignorant, only on different subjects.

Never miss a good chance to shut up.

Too many people spend money they haven’t earned to buy things they don’t want to impress people they don’t like.
Diplomacy is the art of saying ‘Nice doggie’ until you can find a rock.