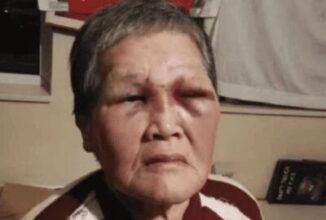 According to Xiao Zhen Xie Bio, Wiki, and Biography, She is an Asian woman who said she was randomly attacked on the street in San Francisco, picked up what looked like a long wooden paddle to defend herself, and ultimately sent the suspect, a middle-aged white man, to the hospital.

Xie has lived in San Francisco for 26 years, according to her family. But they say she is now afraid to leave her home in a senior retirement community.

Xie suffered two black eyes in the attack and was treated at the hospital. Her family says she has been emotionally traumatized by the experience and is now afraid to leave her house.

The violent confrontation occurred around 10 a.m. on March 17 at the intersection of Market Street and Charles J. Brenham Place in San Francisco.

Xie told KPIX-TV she was leaning against a light pole waiting to cross the street when a stranger suddenly punched her in the face. She said the attack was unprovoked.

One of the witnesses who took a video of the aftermath was KPIX Sports Director Dennis O’Donnell, who had been jogging in the area. O’Donnell said Xie waved the wooden paddle in one hand and held an ice pack to her face with the other.

She was visibly distraught and yelled out in Chinese, “This bum, he hit me,” as paramedics handcuffed the man to a stretcher. O’Donnell added, “From what I could see, she wanted more of the guy on the stretcher and the police were holding her back.”

As of this writing, the suspect had only been identified as a 39-year-old white man. The suspect was also accused of assaulting an 83-year-old Asian man just minutes before encountering Xie. The San Francisco PD confirmed to Heavy via email that the suspect had been “involved in a physical altercation in U.N. Plaza.” About 30 minutes after the initial altercation, the suspect “approached the male victim and assaulted him.”

The police spokesperson did not comment on Xie’s defense of herself in the email with Heavy. Police explained the suspect was hospitalized due to “an unrelated, prior medical condition.” The statement included, “Investigators are working to determine if bias was a motivating factor in the incident.”

We are coordinating with our federal partners and local AAPI community organizations and stepping up our patrols in predominantly Asian neighborhoods. As you may know, the San Francisco Bay Area has been seeing an alarming spike in brazen anti-Asian violence in recent weeks. pic.twitter.com/xfDP2wMYsk

The San Francisco Police Department has promised to do more to protect people of Asian descent amid an “alarming spike” in attacks. The department said on Twitter that it was “coordinating with our federal partners and local AAPI community organizations and stepping up our patrols in predominantly Asian neighborhoods.”