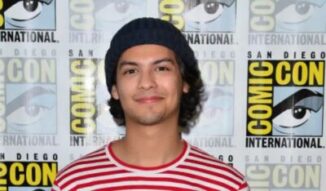 Xolo Maridueña is an Actor and martial artist, Best known for his role as Miguel Diaz in the Netflix series Cobra Kai, and as Victor Graham in the TV series Parenthood. He was born on 9 June 2001 in Los Angeles, California, United States.

He is of Mexican, Cuban, and Ecuadorian descent. His name comes from the Nahuatl Lord, Xolotl. He also is a streamer on Twitch & streams games on his channel Xolo Crunch.

After the shocking ending of Cobra Kai Season 2, fans have been speculating over the fate of Miguel Diaz (Xolo Maridueña). In the episode “No Mercy,” a massive fight between members of Cobra Kai and Miyagi-Do broke out in the halls of West Valley High, resulting in Robby Keene (Tanner Buchanan) to powerfully kick Miguel in the chest.

While it was not intentional, the blow caused the All Valley Under 18 Karate Champion to fly over the guardrail. He appeared to have sustained severe injuries from the fall, and is last seen in a coma and wearing a neck brace at the hospital.

That being said, viewers can expect Miguel to survive in Season 3. In a teaser clip that was released on December 23, the teenager and his mentor Johnny Lawrence (William Zabka) share a moment in his hospital room. Miguel, who appears to be paralyzed from the waist down, is seen struggling to get his phone off of a hospital tray.

When he suggests he would like Johnny to hand it to him, the Cobra Kai instructor pushes the tray away and tells his student to “go get it.” Miguel protests, stating that he is unable to walk, which causes Johnny to aggressively encourage him “to do whatever it takes.” He ends the speech by asserting, “I’m always going to be right here next to you ‘cause I’ll always be your teacher.”