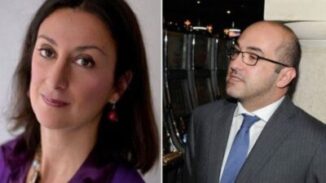 Yorgen Fenech is a Prominent Maltese businessman and the son of the late businessman George Fenech. He arrested in connection with an investigation into the murder of journalist Daphne Caruana Galizia.

Yorgen Fenech is a Maltese businessman and the son of the late businessman George Fenech. He comes from a family that runs one of Malta’s most influential business groups – Tumas Group, for the last 50 years.

The group has investments in various industries; gaming, hospitality and leisure, management, and property development. Fenech serves as the Tumas Group’s CEO; he was also director of the Electro Gas power station.

Jointly with the Gasan Group, Tumas Group is also behind the Quad Business tower in Mrieħel.

Tumas Group also ventured into the energy industry through its company Gem Holdings &#8211; the Maltese company with a 30 per cent stake in the Electro Gas. Gem Holdings owns Electro Gas together with the Azeri state energy company Socar and German firm Siemens own the remaining.

In 2006, the group, along with Singapore-based Portek Group, was awarded a 30-year concession to operate and manage the Grand Harbour Terminals.

Daphne Caruana Galizia, an anti-corruption blogger, was an investigative reporter who, in her 30-year career, had worked for the local Sunday Times and Malta Independent newspapers. A car bomb killed her near her home in October 2017.

After a piece on the Panama Papers leak and its implications in Malta, the news site Politico described her as a one-woman WikiLeaks, crusading against un-transparency and corruption in Malta, an island nation famous for both.

She was regularly threatened or hit with defamation claims from the powerful figures she exposed. She was also on the receiving end of intimidation and threats to her life.

Before her death, Caruana Galizia was considering leaving Malta out of concern for her safety. She published her final blog post just half an hour before she was killed.

Fenech was arrested on his yacht in Malta in the early hours of Wednesday on 20, Nov. 2019. </span>As well as the suspected middleman. who has not been named &#8211; three other suspects are in custody over the journalist’s murder.